Sorry again for the lag time between posts – we’ve had an incredibly busy (and amazing) March!

A quick recap of activities: first, we traveled to Belgium to meet up with one of my best friends from childhood (and her beau), then we had K Mau here from RVa, and ended the month with my family coming to visit! Super awesome times were had, and blogs will be written!

(Side note) It’s pretty funny – the students in my English classes ask me all the time where my next adventure is going to be. One told me this past week that he’s pretty sure I’ve officially been more places in Europe than he has, and he’s from here. =)

Without further ado, I’d like to introduce to you, the yummiest waffle known to mankind! Oh… wait. I just realized I didn’t take a picture of it, probably because I somehow managed to eat it while the waiter was still delivering it to our table. I’ll explain it to you. It was the perfect amount of crunchy and soft, and absolutely drenched in Nutella. There is literally nothing else that can be said about it.

We took a train from Cologne (where we celebrated Carnaval with a multitude of beers and chocolate) to Brussels, where we decided to kill a few hours before heading to our final destination of Bruges.

Brussels turned out to be a pretty spectacular way to “kill a few hours,” especially not realizing that some of the prettiest buildings I’ve ever seen turn out to reside in here! Here’s a picture of city hall (you know, the dreary place where dreams go to die):

We walked straight from the train station to the center city square and just drank a beer while taking it all in. Here is where we got our first glimpse of the notorious Belgian Waffle, as well as insanely long lines at least 20 people deep to get fries (we had no idea why, but just assumed they fried them in Marijuana oil). It turns out, fries are from Belgium! My mind was reasonably blown when I discovered that (you know, given that they’re called FRENCH fries). But then when you think about it, fries make people happy, and the French aren’t stereotypically so happy, so I guess it makes sense that they didn’t really come from there….

Ok, anyway. Here are more pictures of Brussels to distract you from that rant:

After a few hours, we hopped back on the train to Bruges! I was so excited about what we were going to encounter here (especially after having watched “In Bruges” to prepare… heads up – it’s a cool movie, but maybe not the best to watch if you’re aiming for a feel-good flick.)

We found our hotel, deemed it acceptable (minus the strong smell of garbage upon walking into the lobby), and walked back to the train station to get Sarah and Eric! That evening, we walked around the old city, ate fries (duh), drank beer (duh), and just hung out.

Since Brian and I were only going to be in Bruges until 5 p.m. the next day, we knew we had to cram in as much as we could in 8 hours. The first order of business (that we had known about for many weeks beforehand), was to visit a small beer store that maybe, possibly, had a small chance of carrying a Trappist Westvleteren 12 Monk Beer. Apparently it’s the most elusive beer in the world (not to mention expensive), but Sarah and Eric are crazy about good beer, so we ran to the store at 9 in the morning, and asked the woman if they carried it. Turns out, they do! What happened next is beyond anything I’ve ever witnessed Sarah do in terms of physicality (and she was a catcher in little league baseball… with boys). She flew at the wall of beer so fast that the woman in charge of the store had to literally duck so Sarah’s arms wouldn’t knock her over. It was… spectacular. The woman thought it was hilarious and laughed with us about it, but I could still see a tiny glimmer of fear in her eyes.

Upon securing a bottle of the unmarked brew (which Sarah later told me was delicious!), we went to… surprise, surprise… a brewery! We wanted to take a tour (and we had heard through credible sources that the view at the top of the brewery was second only to the bell tower, and with the same cost of entry, worth it because it included a beer). Here are some brewery shots! 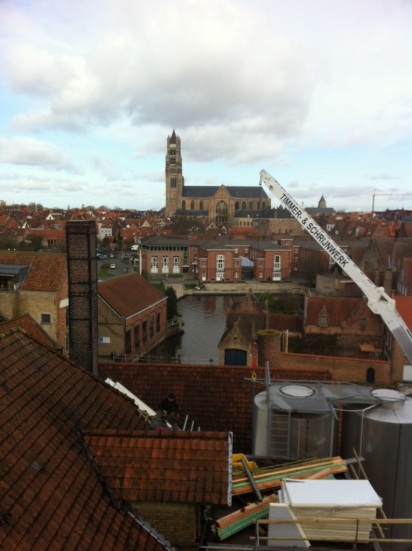 After the brewery, we devoured some of those infamous Belgian Waffles, and made our way to a nunnery, to do some quiet and conservative picture taking. Just a recommendation for further visits to a brewery and nunnery – do them in the opposite order… 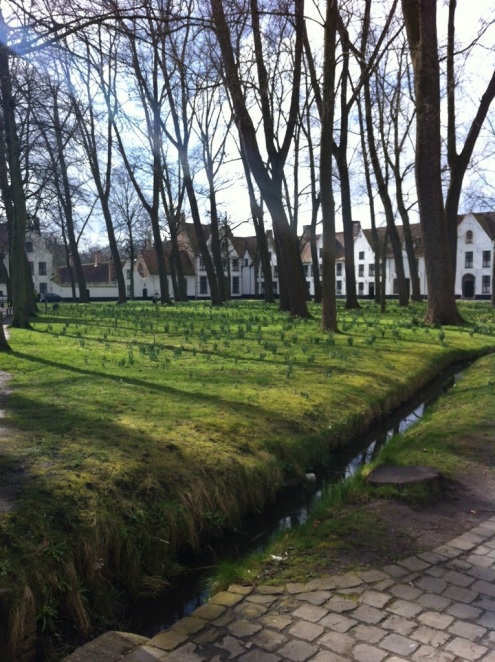 The rest of the trip was spent lazing around the city, taking in it’s beautiful architecture and colors, and enjoying each other’s company! It was so amazing to be able to spend (even just 24 hours) with Sarah in Europe – I hope to be able to do it again some day!! 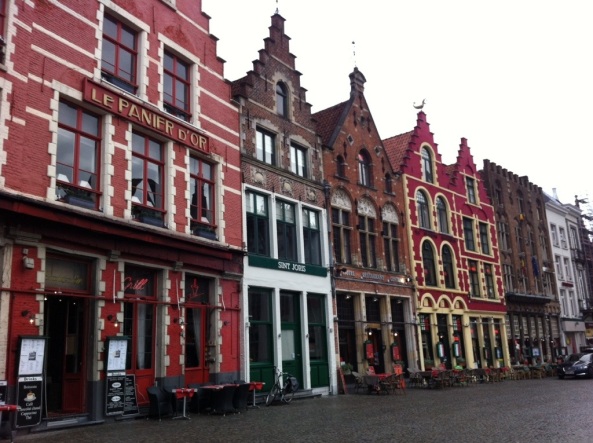 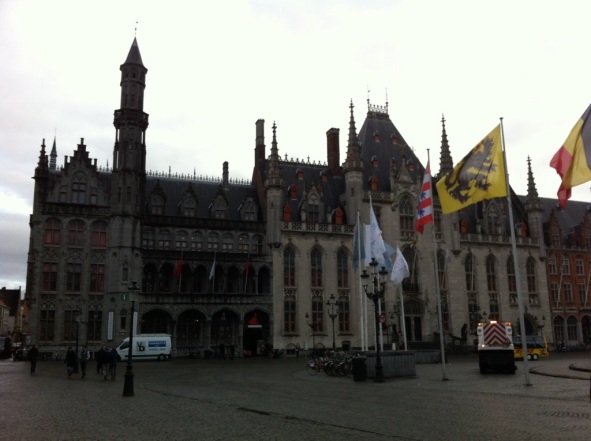 Sarah and Eric being cute, or something. 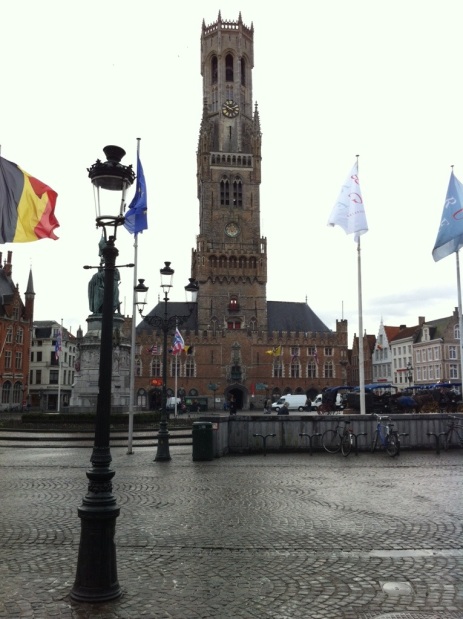 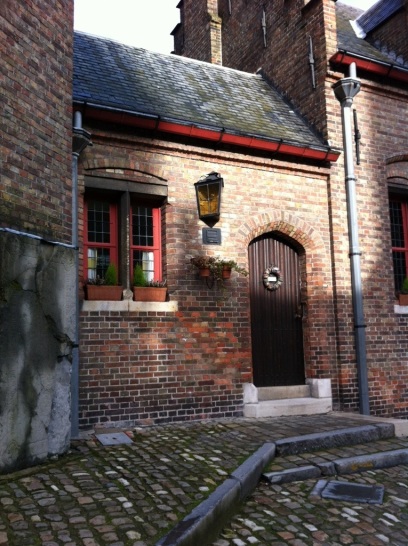 The Belgian hug heard ’round the world! 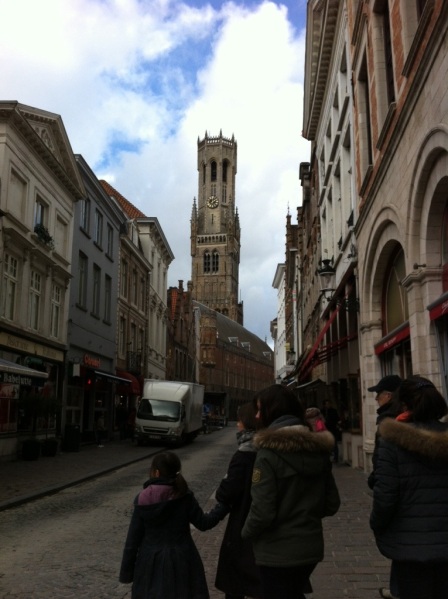 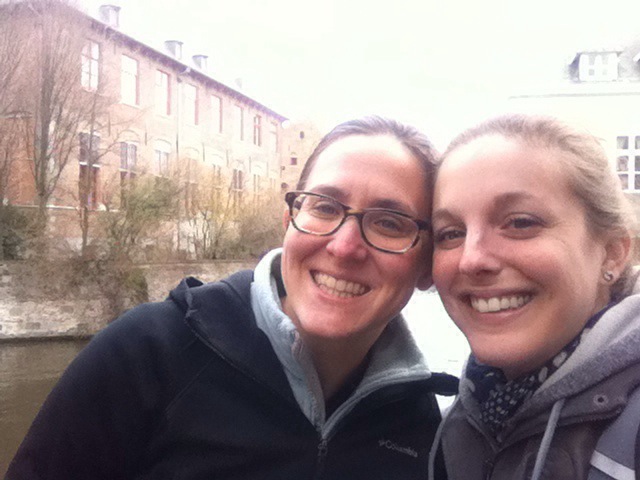 I just love all the exteriors!

Bell tower with a glorious sky!

2 thoughts on “Men are from Mars, Women are from Venus, and French Fries are from Belgium”