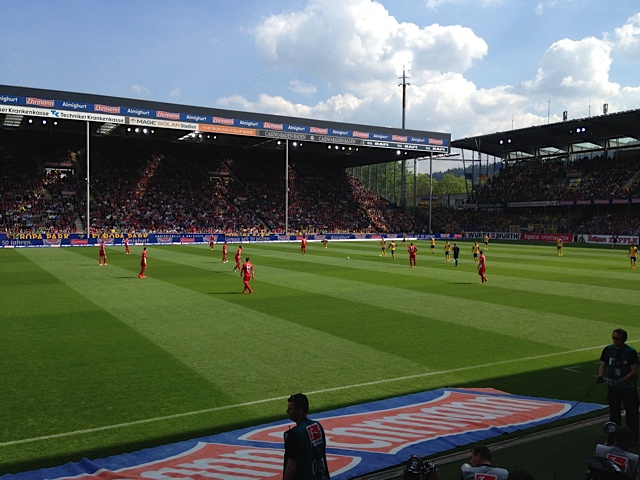 Freiburg is a pretty small city; its roughly 225,000 residents make it the 34th largest city in Germany. A bustling metropolis, this is not.

Despite its small size, however, Freiburg boasts one of Germany’s most successful football (soccer) teams. Ok, not successful in the same way as Bayern Munich, where every day without another trophy is a wasted day, but successful in that the team usually plays in the top division of German football. This means that despite being just the 34th largest city in Germany, Freiburg’s team is one of the best 18 sides in the country (and last season, they placed 5th, the best finish ever for the club).

Attending a top-flight European football match is a unique experience, and Erin and I have been lucky enough to go to three games. Our seats got better each time (and the team got better, too!), so here are our varying attempts at German football fandom:

This was the first home game of the season, and the first since we arrived in Freiburg, so we didn’t know what to expect. Just before kickoff, we were able to scalp tickets outside the stadium. Unfortunately, just before kickoff means much too late to get a view of the field. It seems that the team sells roughly 100 more standing-room-only tickets than it has space for, and we were left to try and crane our necks over a crowd of Germans. Also unfortunate: Germans are some of the tallest people in the world.

The team lost 2-1, not that we saw much of it. But the atmosphere was fun, and we were determined to try again.

This time we went early, and were rewarded for doing so. Arriving about an hour before kickoff, we immediately started asking about available tickets. In a stroke of pure luck, a woman overheard me asking for standing-room tickets, and gave me two. So I pulled out my wallet to pay for them, but she refused! All she said was, “a gift”, and walked away before we could say thanks.

Due to our early arrival, we were able to get a good view of the field from the corner, meaning we actually saw most of this game, and could watch the Freiburg crazies on the north side of the stadium jumping up and down and chanting throughout the match.

The team even sort-of cooperated, earning a draw with Hoffenheim, who are currently in the top half of the league.

Last weekend, we went to what will probably be our last match of the season. With just a few matches left, and Freiburg fighting to avoid relegation to Germany’s second tier (yes, this happens in european football), this was an important match. And an opportunity to win, since Braunschweig is the last-place team (as an aside, I do feel bad for them – they won a promotion to the top league last year, and will be headed back down to the second division after just one season).

As with our last match, we arrived an hour early, though finding a ticket wasn’t coming as easy as in the past. Perhaps Freiburgers sensed the opportunity at this match. But luck struck again. A man whose tickets were originally out of our price range got impatient, found us still looking for tickets, and offered us a lower price. At 20€ each, they were still more than we wanted to pay for standing-room-only tickets, though our luck was just beginning.

These were no standing-room tickets. What were being offered were two front row seats 25 yards from midfield! Upon learning this, we happily accepted the price, and into the stadium we went. It was pretty spectacular.

We had a chair to sit on, rather than stand. The roof covered our section, so we were in the shade the entirety of the game. And of course, the view was completely unobstructed, and so close to the field. I don’t think I’ll ever again have a soccer experience with that combination of view of the match plus level of play (what are the odds of sitting in the front row at a World Cup or Champions League match in my lifetime?).

And to cap it off, SC Freiburg won 2-0, crucial towards staying in the top league next year. The players danced on the field, the crowd sang songs about beer, and everyone in the stadium just seemed so happy afterwards.

If this was our last match, we definitely saved the best for last.

Want to see more posts like this one? Follow our blog using the button at the top of this page!