As Erin mentioned in a previous post, bicycles are a big deal around here.  It seems that almost everyone rides them, and there are often more bikes than cars on the roads.  We definitely wanted to join the two-wheeled party, and decided to buy a pair of bikes.

One option was the many cycling stores around town, but they typically only sell fancy bikes at fancy prices, so we had to look elsewhere.  Fortunately, when looking elsewhere you often see bikes with for sale signs on them (see photo).

It’s common for people (read: students) to sell their bikes this way, so we simply looked until we found a bike we liked.  Before long, I found a bike for 20€, met the girl selling it, and gave it a test drive.  Everything checked out, save for a few minor problems (it was 20€ after all).  After exchanging money, I rode the bike back home.

Well, tried to anyway.  On the way home, the bike’s chain and cassette finally decided they’d had enough (seriously, they couldn’t have decided this 3 minutes sooner?!?), and I was left with a pile of metal and rubber, and without 20 bucks.  Even more unfortunately, I was told by two bike repair shops that many more Euros worth of new parts would be needed to really make the bike function, and I’d be better of buying a new bike.

So back to square one. 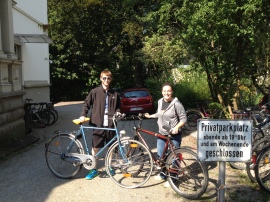 Luckily for us, the second attempt was more successful (so far), and Erin and I are now both proud owners of bicycles that actually move when you pedal them.  If you didn’t already know us, you might think we’re native Freiburgers as we whiz past foot traffic on our way around town.

2 thoughts on “Buying a Bicycle in Freiburg”