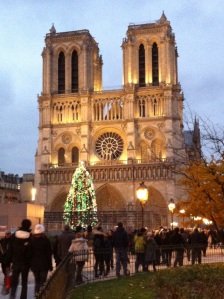 Sometimes, Brian and I have to pinch ourselves because of how lucky we are. Just 4 days after getting back from an amazing Thanksgiving in London, we were setting off via train to Paris to visit my uncle and aunt from Maryland! Side note: fast trains are mind blowing. We topped out at 315 km/hour on one particularly long straight away (that’s 195 mph for my non-metric system buddies.)

We arrived on Thursday morning into Paris L’Est to my very bundled up aunt who was proving her detective skills to me, as I simply gave her the time at which our train was set to arrive and no other useful information. I’m still impressed.

Anyway, we headed to our hotel in Pont de Sevres (pronounced “pond de sev” … why all the extra letters?!) where we dropped off our luggage and grabbed some lunch. My aunt then gave us the tour of “dynamic Sevres,” which she kept calling the “Forest Glen of Paris.” (That joke is for my DC and Maryland buddies if any of them are reading.) After an enlightening 45 minutes, we then headed into the city center and did extremely Parisian things like gawking at the Eiffel Tower and drinking overpriced Espresso at a cafe. My uncle had to work the whole day, so we finally met up with him for dinner! 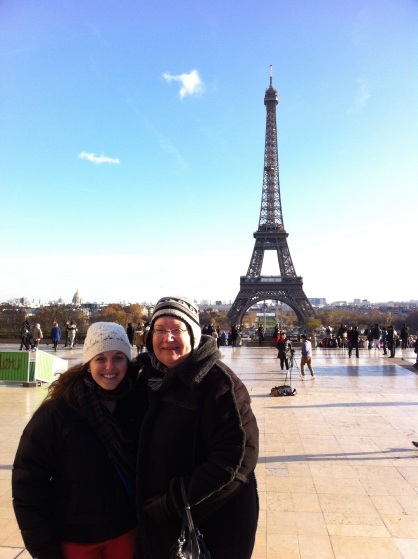 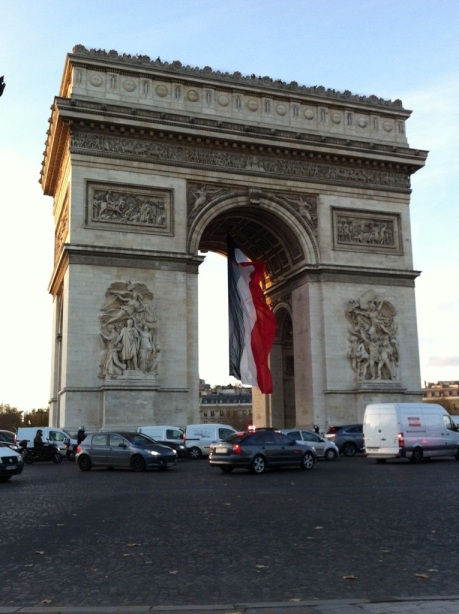 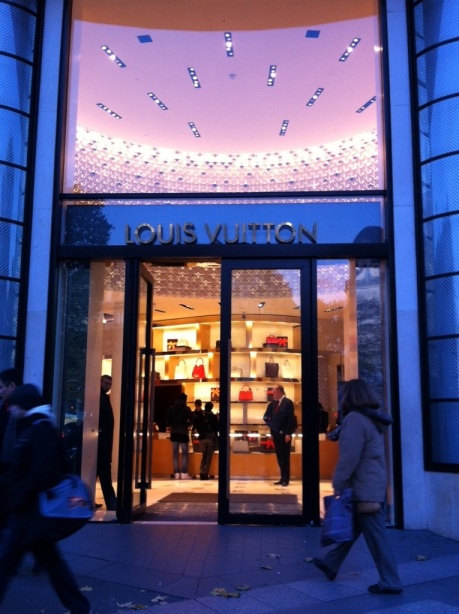 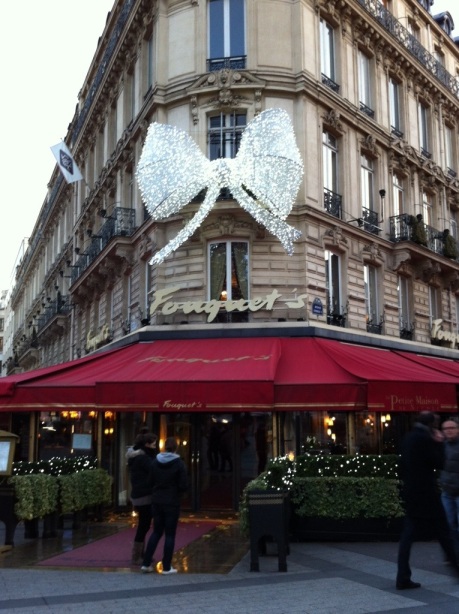 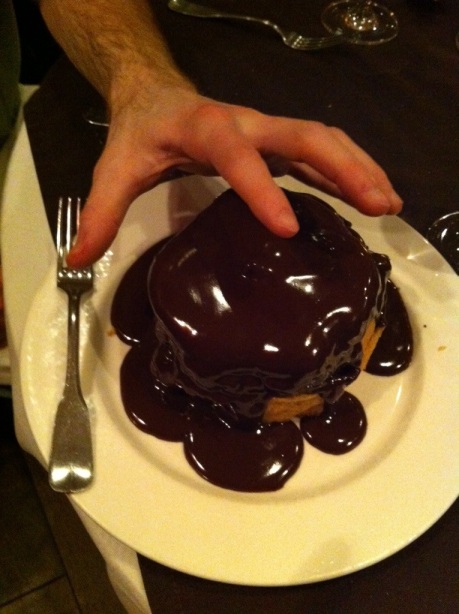 Friday was great because both Brian and I got to do something new, which was to go to Versailles! I highly recommend a day trip here, as you can walk through the palace and the gardens, both of which offer something of interest to everyone! For example, the palace had room after room of massive, intricate paintings on the ceilings, as well as furniture that appeared to have been from the 1600s. This includes tiny beds that even I may not fit on. I think I’m living in the wrong time period…

The gardens were gorgeous albeit very cold, but we walked for at least a couple of miles and saw acres of lakes, labyrinths, and gravel roads. Dinner that night was at a friend of my family’s typical French restaurant, and it did not disappoint. Holy yum! After dinner, Brian and I stayed out like the cool, hip kids we are, and walked down the Champs-Elysees which was hosting it’s very own Parisian Christmas Market! We didn’t like it as much as our local Weinachtsmarkt here in Freiburg (more on that in an upcoming blog), but it was still fun to walk by all the “local craft” vendors (including one by Samsung Galaxy…). At the end of the evening, Brian and I indulged in a Ferris wheel trip, which allowed us to see most of Paris from atop! 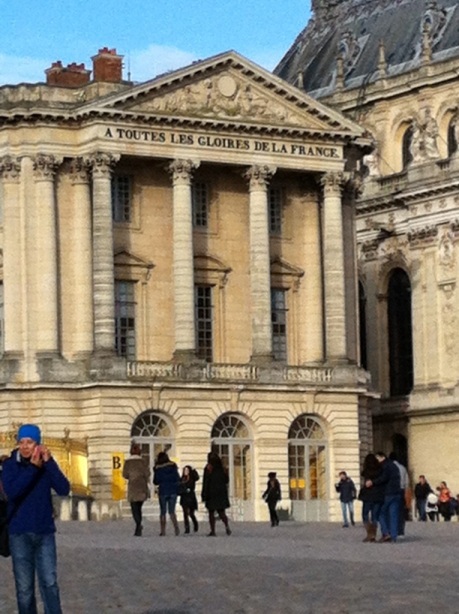 Versailles – “To all the glories of France.” 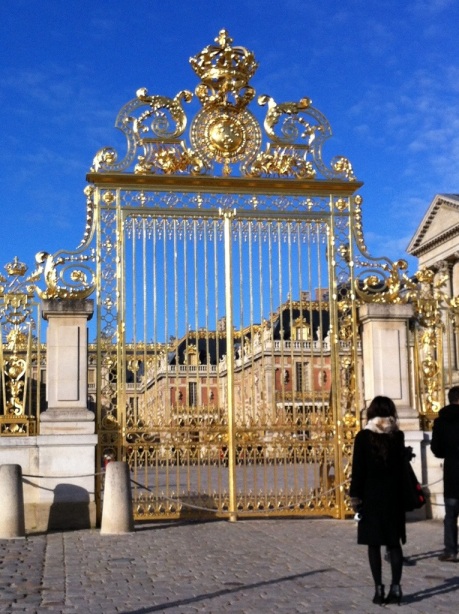 More Versailles! Not showy at all. 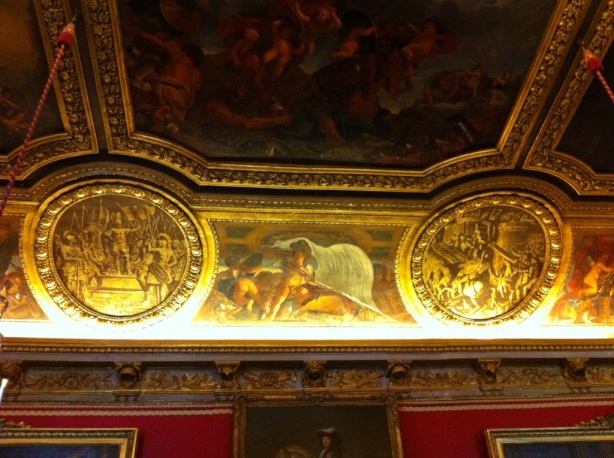 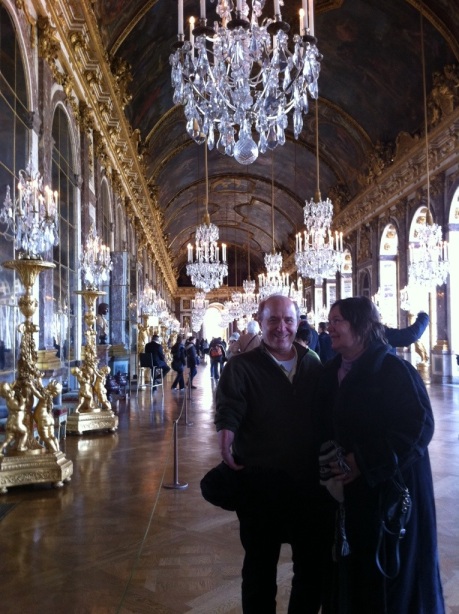 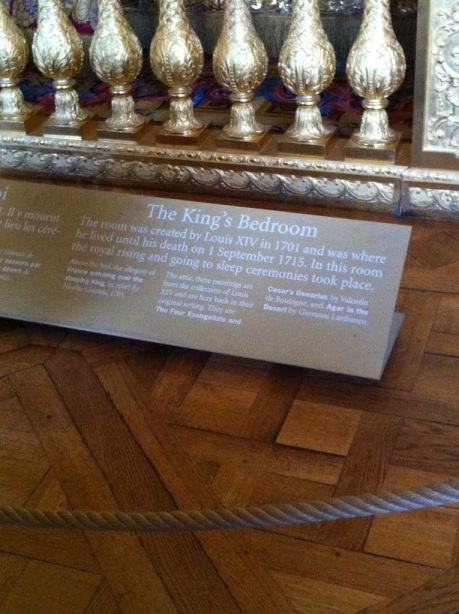 Yes, that says “royal rising and going to sleep ceremonies.” 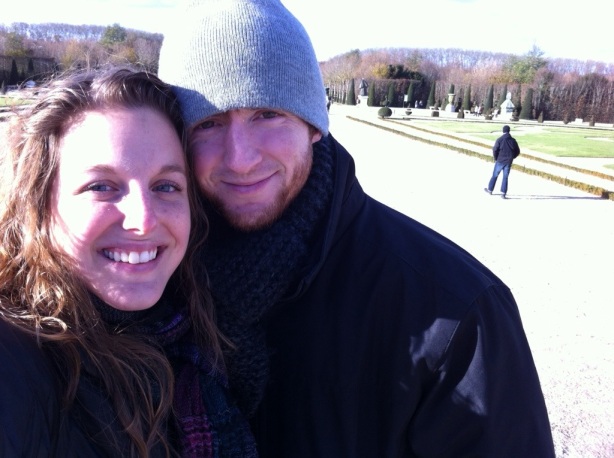 In the gardens at Versailles. 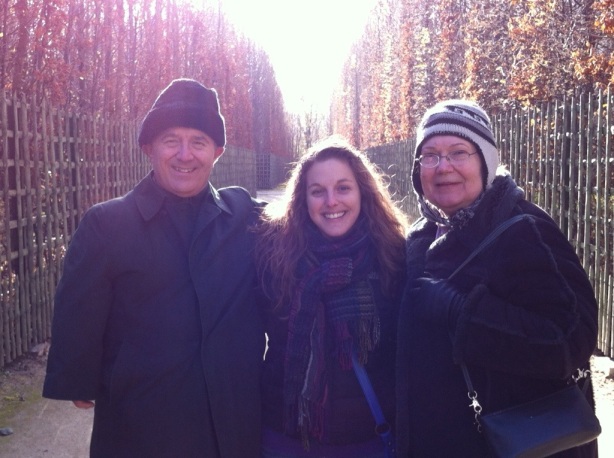 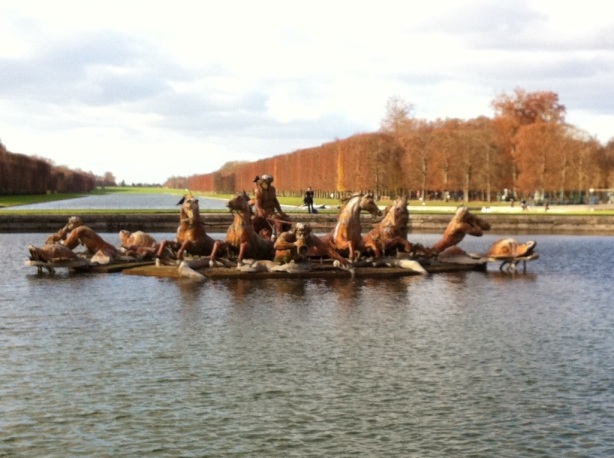 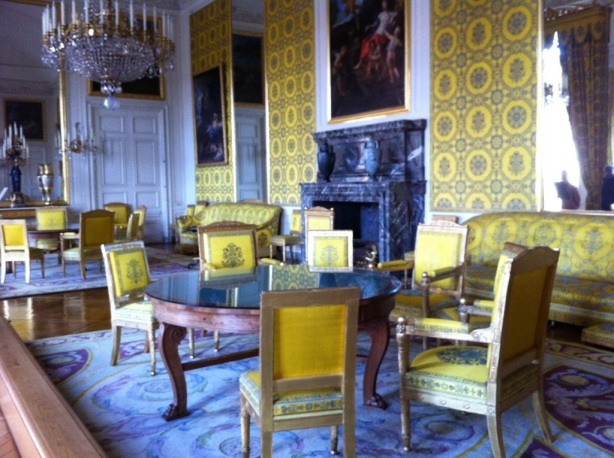 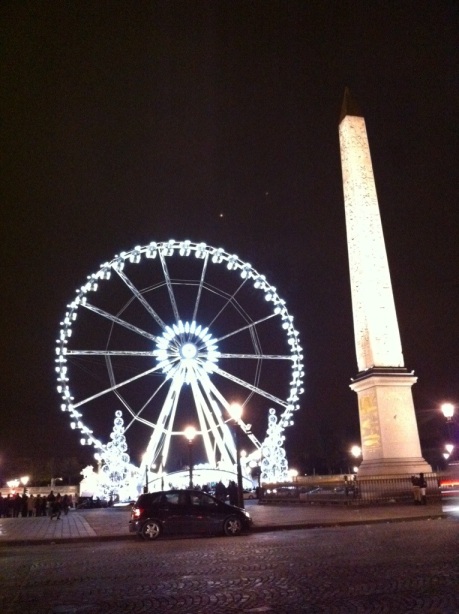 At the end of Champs-Elysees 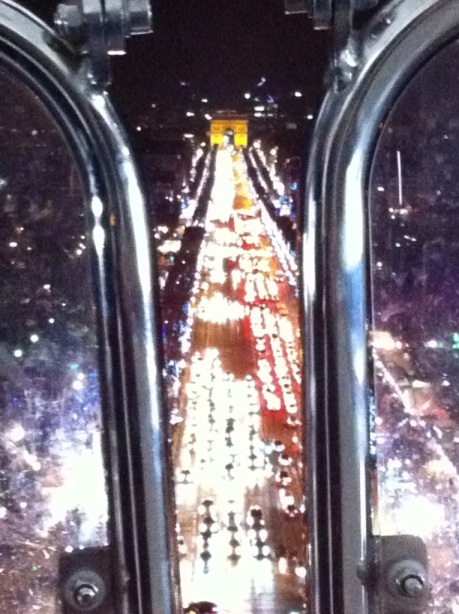 View from the Ferris Wheel! 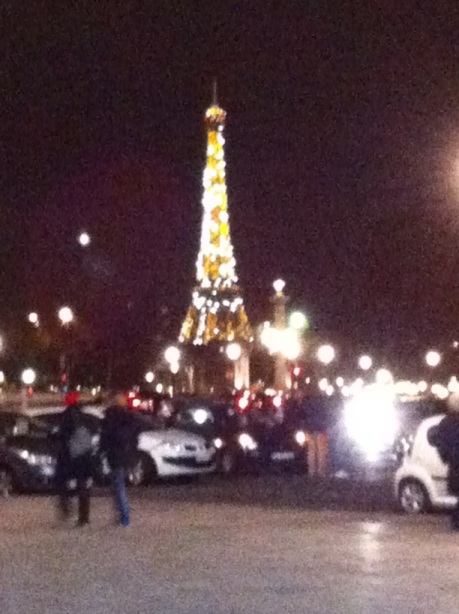 On Saturday, we simply spent the day walking around Paris, which is just so pretty in the wintertime. We walked along the Seine most of the time, and saw the Louvre, the lock bridge, the Eiffel Tower, Musee d’Orsay, Jardin de Luxembourg, and then Notre Dame! Later that evening, Brian and I also shared an 8 Euro beer with 2 straws, and it was extremely romantic. 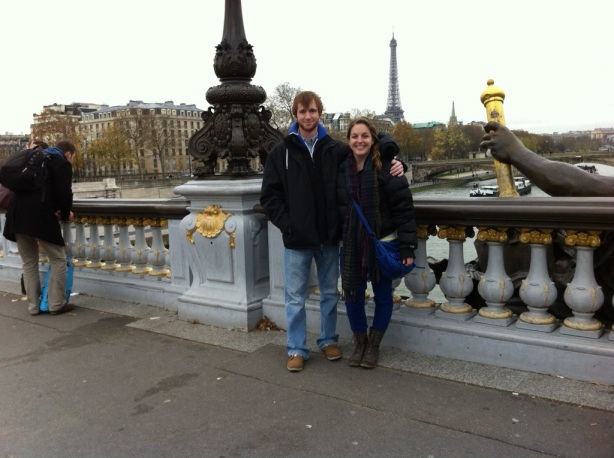 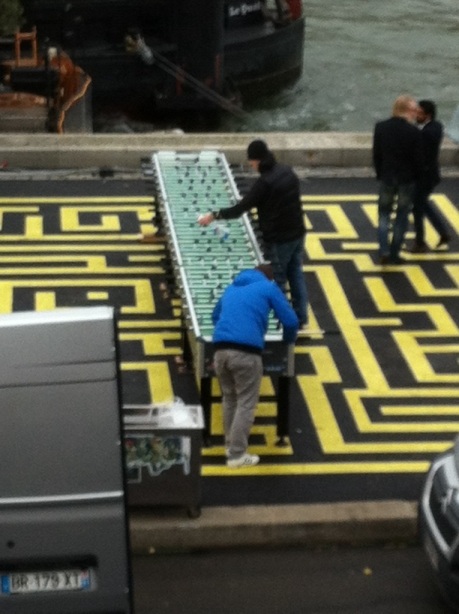 Potentially the greatest fußball table EVER. 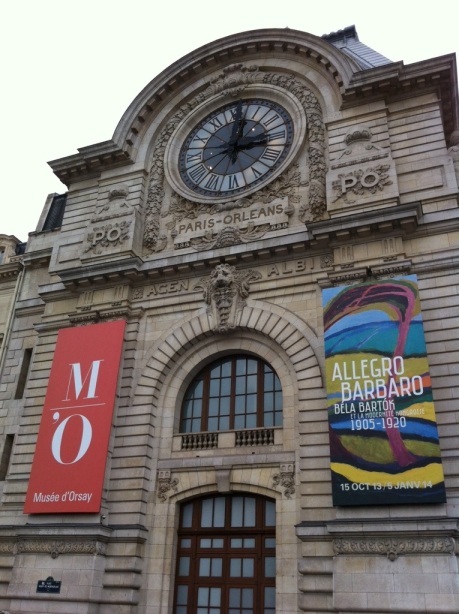 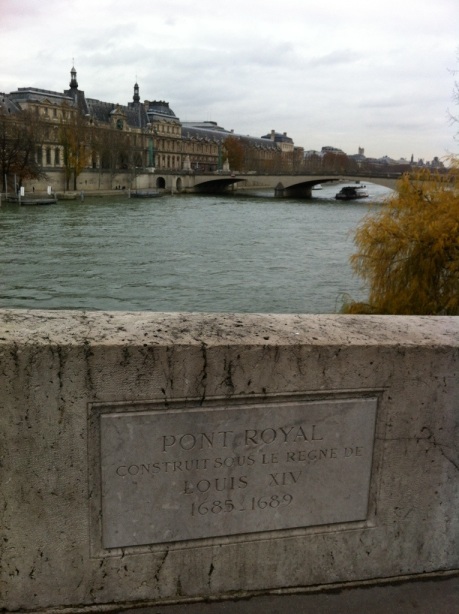 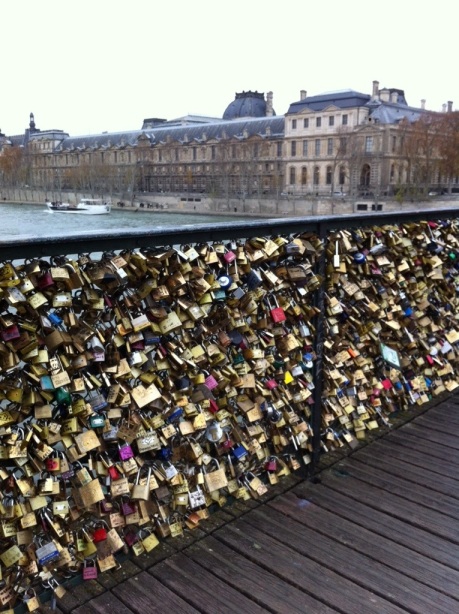 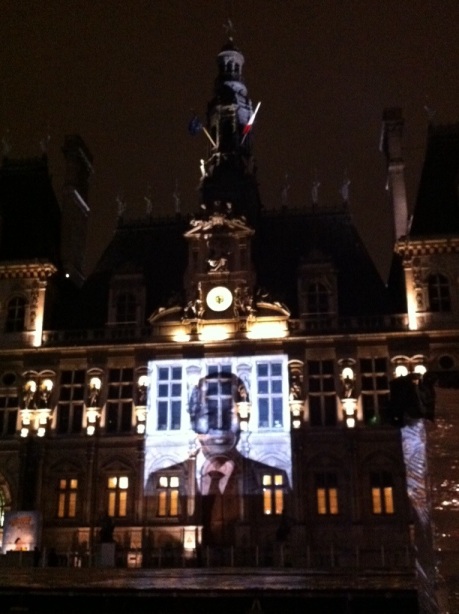 A tribute to Mandela the day after he passed away. 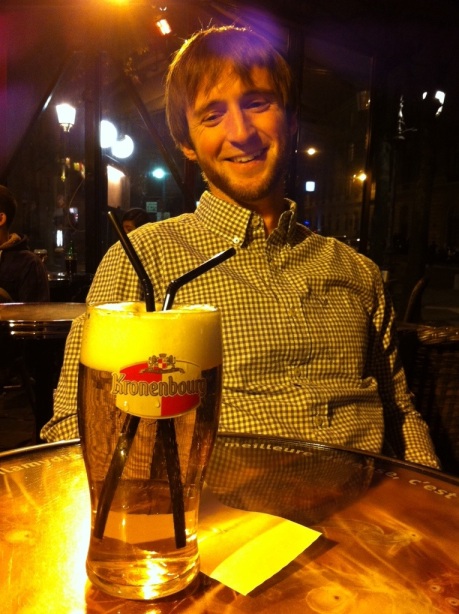 The most romantic beer we’ve ever shared.

We headed back home on Sunday after a very busy walking and eating trip of Paris, and it was just especially nice to see some family after so long!