Having lived in Freiburg for nearly a year, I’ve noticed some strange things in and around the city. These quirks are what give Freiburg its character and uniqueness, and I think if you could ask the people here, you’d find that far from wanting to tone it down where strangeness is concerned, Freiburgers are quite proud of it.

Here are a few of my favorite examples of whimsical Freiburg:

Most of Freiburg and its neighborhoods are served by the excellent public tram system and it’s four tram lines. As most cities with a public transport system do, Freiburg uses a numbering system to name the different routes. Naturally, they are numbered 1, 2, 3, and 5.

This leads to my favorite (theoretical) conversation between a tourist and a mischievous Freiburger. “How do I get to my hotel?” “Well, it’s simple really. You’ll just want to take tram #4 all the way to (German-sounding location), get off there, and then you can’t miss it!”

Rathausplatz (City Hall Square) is one of the most important public spaces in any German city. You’ll often find art, statues, historical artifacts, or other such centerpieces in the middle of the square. In Freiburg, Rathausplatz has a statue of Berthold Schwarz.

What’s so strange about that, you might ask? Well, nothing, if you don’t mind the small detail that Herr Schwarz never actually existed. See, a few hundred years ago, the Germans got the idea that they should claim the invention of gun powder as their own (most historians agree that the Chinese invented it). So they decided to create a character, and pass him off as real. In order to make him and “his invention” seem more legitimate, they gave him the name Berthold Schwarz. Gun powder in German is called Schwarzpulver, and this way it seemed like the substance was named after its inventor.

There is some debate about the origin of this particular gargoyle, but its existence cannot be argued. On the south side of Freiburg’s Münster, only the most prominent religious building in the Schwarzwald, there is a gargoyle unlike the rest. While most face out towards the surrounding square, this particular gargoyle is facing the other way, showing off his, ahem, Gesäße, to the world.

My favorite story to explain why this gargoyle exists is simple: Freiburg once had a bishop that the citizens weren’t particularly fond of. Rather than force him out and deal with the consequences of such severe action, the people came up with a clever idea. While doing construction on the Münster, some workers installed the backwards gargoyle so that his backside would point at the bishop’s house, letting him know just what the citizens thought of him. 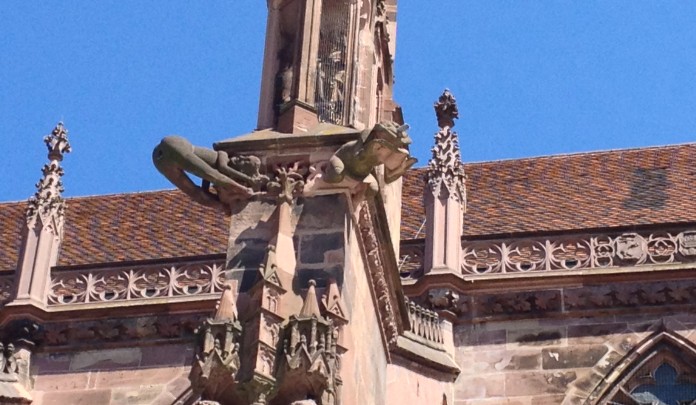 On the side of one of Freiburg’s old city gates is a peculiar painting. It depicts a man standing next to a wagon carrying two barrels of gold. The story of this man says that he once decided we would bring all his gold to Freiburg in an attempt to purchase the city. That’s right, the entire city.

The story goes that when he arrived here, he proclaimed his intentions and spilled the gold onto the floor for everyone to see. Unfortunately for him, it was only then that he learned his wife had stolen the gold before he left home, and filled the barrels with sand and stones instead. The citizens of Freiburg, being quite insulted (really, you think our entire city is worth just two barrels of sand?), decided that laughing him out of town wasn’t enough; they decided to paint his picture on one of Freiburg’s most iconic buildings.

Better yet, they painted him with his gold, so he could see what might’ve been. 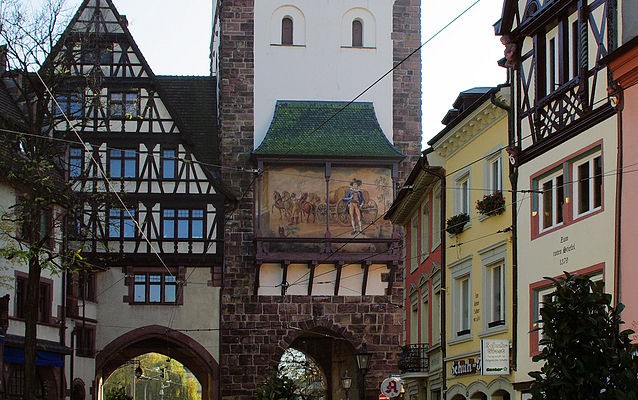 What are your favorite stories about Freiburg?