Having been in Nice for almost 3 weeks now, we’ve made a pretty serious dent in the number of beaches visited. We even splurged and bought a 20€ beach umbrella, so it’s been more than comfortable to sit on the beach for prolonged periods of time (especially given the lack of pigmentation in both mine and Brian’s skin – the shade is crucial to our enjoyment!)

I believe my youngest brother calls it shadow hopping…

Anyway, here are some pictures and descriptions sure to make you want to come visit, like, right now. 🙂

Nice Beach is actually a series of stone beaches, located all along the Promenade des Anglais (English Promenade), which runs for several miles down the coast of Nice (basically between the airport and the Castle Hill). It’s a beautiful area but often swamped with people, especially in the summer months. It’s also not the most comfortable of beaches because of the large stones, so Brian and I have taken to wearing our most fashionable water shoes while getting from our umbrella to the water. 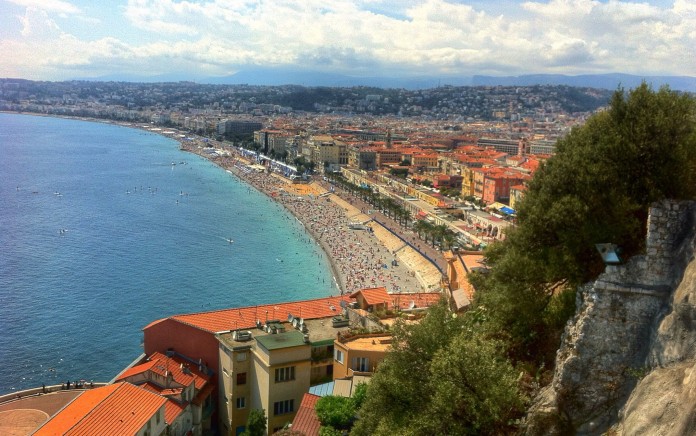 Nice Beach along the Promenade.

This is the closest beach to where we live, only about a 25-minute door-to-door journey, but we don’t often come here to swim, actually. We mostly come here to walk down the Promenade and people watch, or to sit under one of the snazzy verandas with benches.

Yes, the water really IS that color.

This is also a stone beach along the Promenade, but it deserves its own section because of the epic triple diving board the beach boasts. I actually don’t think these were intended to be diving boards, but someone tied a rope to the bottom plank, and the rest is history! (Actually, I believe climbing this structure is technically forbidden, but there are almost always a handful of teenage boys on it, jumping off, so we decided to go for it.)

I don’t think he was pushed, but you never know!

Brian and I have only been here once, but it was awesome. The beach is super tiny, so we parked our belongings in a corner and jumped in the water, swimming out to the boards to see what they were all about. I wish I had pictures of the rope climb to get onto the structure, but since I barely trust myself with my iPhone while walking on the sidewalk, there was no way I would trust myself with it in the depths of the Mediterranean.

Anyway, we climbed, I spent several minutes wondering why in God’s name I had agreed to participate, and then we jumped! And it was awesome. We’ll definitely be going back to jump again!

This is by far our favorite beach on the Côte d’Azur. It’s a bit farther from where we live (about a 20-minute tram ride, followed by a 20/25-minute bus ride, then a 15-minute walk to the beach), but it’s totally worth it. The ground is made of tiny pebbles, so while it’s still not sand, it’s much easier on the feet. It’s also more family-friendly, meaning we feel a bit safer leaving our belongings on the beach while we go in the water.

Villefranche Beach from above. 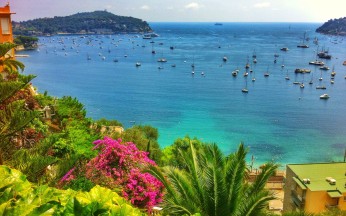 View of Villefranche from the highway.

The backdrop of Villefranche Beach is the village of Villefranche, which lies on the slope of a large hill. The buildings and construction of the village are exactly what you’d expect of a Mediterranean town, that is, orange in color, each building having it’s own character, and full of life. The coast offers tons of restaurants and souvenir shops, but it doesn’t actually feel too touristy. (And that’s a shock given that Royal Caribbean and Aida use the Villefranche harbor to park their tiny boats.) 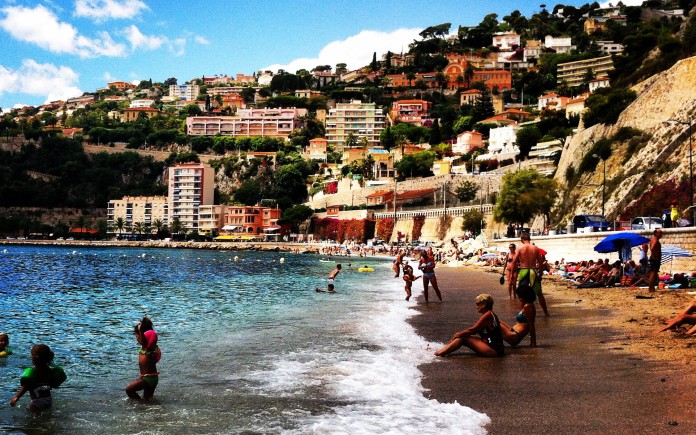 Mala is a tiny beach that offers 3 small areas for the general public to set up their beach spot, and 2 restaurants, probably very costly, with umbrella and chair set ups. Despite the fact that the restaurants take up at least half of the beach, the setting here makes you forget about that. The beach is located right next to a steep cliff, making the contrasting scenery that much more interesting.

This beach is a bit farther away. In fact, we were going to hike from the end of Cap d’Ail (the village right before Monaco) to Mala Beach (about 3.7 km), but by the time we arrived in the center of Cap d’Ail we decided we’d rather just go straight to the beach. It took us almost an hour to get here, but the backdrop of this beach made it totally worth it.

This is actually a small island (part of the Lerins Islands) off the coast of Cannes. We took a 15-minute ferry from Cannes, and once we arrived, we walked to the other side to find a less-populated beach. Well, it wasn’t exactly desolate – between Île Sainte-Marguerite (the big island), and Île Saint-Honorat (the small island) is apparently the place to bring your boat and party! 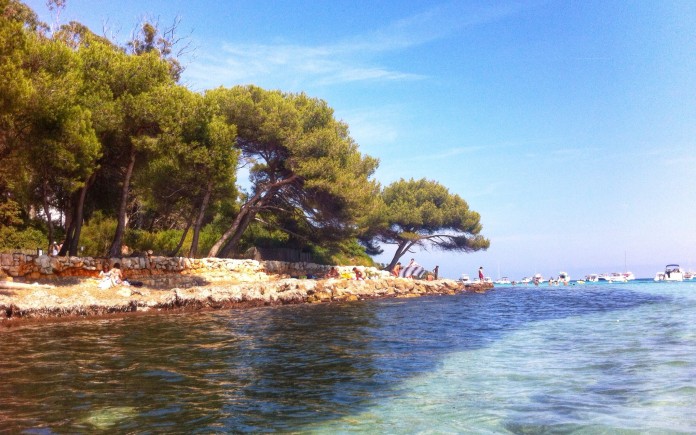 I actually waded out in the water for this shot!

It was actually great fun. There weren’t a ton of people on the actual beach since they were all in and around their boats, but it was a gorgeous area with great swimming. And the beach wasn’t stone, so that was a win! The downside was that the ground was actually made of something like wood shavings, so it was impossible to ever be free of them. It is much easier to walk on than stones, though.

This small, SANDY beach is right next to the old town of Antibes. Yes, I said sand! It was so exciting. This beach is also beautiful given the backdrop, but it’s very small and very crowded. I think everyone vacationing on the French Riviera was here the same day we were. Seriously. 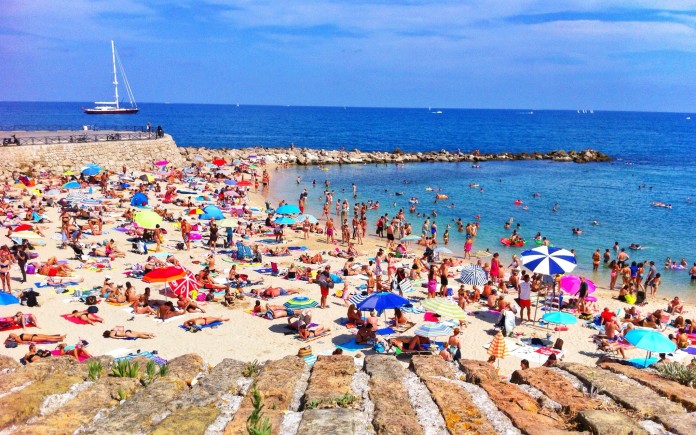 Sandy beach! With everyone in the world.

Just a bit of advice to travelers looking to enjoy some time here – it’s best done in the mid-afternoon, around 4:30 p.m. We got here at first around two, and that was a huge mistake, so we left and came back a couple of hours later to find it much less crowded. Also, avoid the side of the beach closest to the city – the water was full of trash and cigarette butts (this was a first for us here; the water all along the mediterranean is insanely clean and clear!) The other side was much better.