30 days in Nice leaves time for a lot of day trips. Situated right in the middle of the French Riviera, Nice is the perfect jumping off point for short trips to multiple coastal towns. Here are some of my favorite to Nice’s east.

Eze is actually two towns; Eze sur mer, which is on the coast, and Eze Village, which is 400 meters up the hills. The coastal town offers a beach, but the highlight here is really the village. With it’s narrow, winding streets and steps, visiting the village really does feel like stepping back in time. The Exotic Gardens provide the best view of the coast, but you have to pay a fee to gain admittance. Additionally, Eze Village is home to Fragonard. You can tour this perfume maker’s factory for free.

How to get there: Take bus 100 from Nice to Eze sur mer (stop: Gare SNCF Eze). From there you can take bus 83 to Eze Village, or hike up the Nietzsche Path. You can also take bus 82 from Nice Vauban directly to Eze Village.

Looking at the Mediterranean from Eze Village

The Principality of Monaco is Europe’s 2nd smallest independent country at just 2 square kilometers, according to the CIA Factbook, and it’s entirely within France. Mostly known for hosting the rich and famous, you can spend all day gawking at luxury yachts and exotic cars (seriously, with all the Ferrari’s and Maserati’s, it feels like people would be ashamed to drive a Mercedes around Monaco). But there are a few other things of interest there: 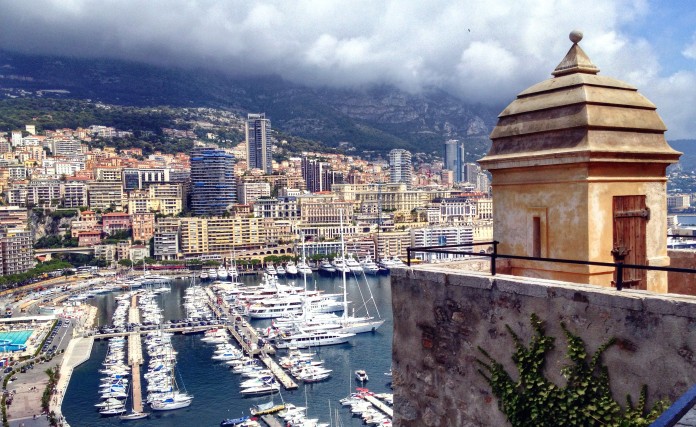 Monaco sure knows how to show off wealth

Cap d’Ail is a small town between Eze and Monaco that is known primarily for its beach cove. Set in a small inlet, and surrounded by steep cliffs, going to the beach here can feel like you found a secret, even if it’s entirely crowded with other people. It is a stone beach, so don’t go expecting sand, and it isn’t the most convenient to get to (though some might say that’s part of Cap d’Ail’s charm).

How to get there: Take bus 100 from Nice directly to Cap d’Ail, getting off at the stop Edmond’s Cap d’Ail. From there follow the signs down to the beach, but be prepared for a lot of steps (~150 of them). Alternatively, you can take the train from Nice’s main station, but you still have to use the stairs.

One thought on “Daytrips from Nice, France: Heading East”