As most of you probably know, Germany won the World Cup last night! It. Was. Awesome. 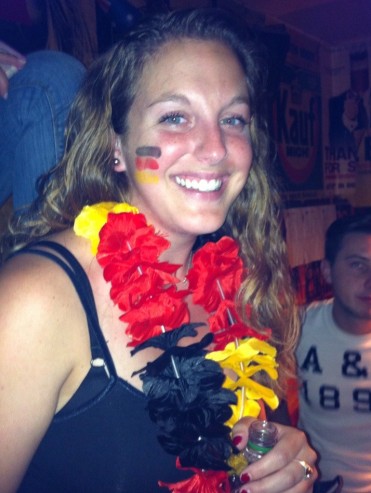 Being in Germany during the majority of the tournament (save for the first 2 group stage games when we were in Belize) has been so much fun! We’ve been to biergartens, bars, public viewings, and even watched a game at home on our computer (unfortunately, the latter was the Germany-Brazil game in which the final score was a ridiculous 7-1… that would have been a great game to be out for)!

We went to a public viewing for the U.S.-Germany game, which consisted of a large expanse surrounded by food and drink vendors and a large projection screen at the far corner from the entrance. This was great fun, despite the U.S. losing 1-0. We knew that even with a loss, both the U.S. and Germany would advance to the Round of 16, so we were OK with it. 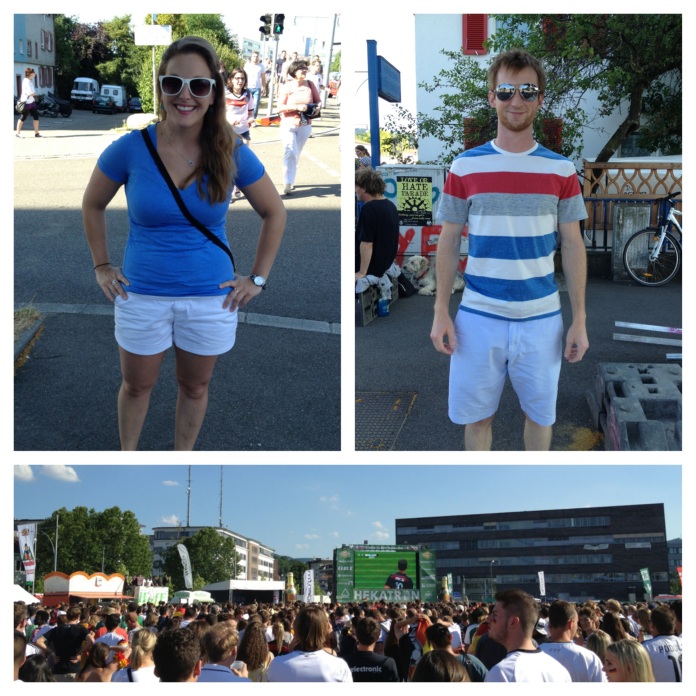 Representing the U.S. at the Fan Mile!

We occupied our favorite biergarten twice, during the Germany-France and Germany-Nigeria games. These had vastly different atmospheres: the Nigeria game was at 10 p.m. on a cold, windy Sunday, so we had half of the biergarten to ourselves. In comparison, the France game was at 6 p.m. on a Friday, so when we got there at 4:30, it was already packed. Germans are certainly punctual when it comes to matters of fussball.

Last night, however, was undoubtedly the best street party Freiburg (and I’m guessing many other cities in Germany) has ever seen. As soon as the game was over, people poured into the streets, waving Germany flags, setting off fireworks, and cheering/chanting the German slogans. 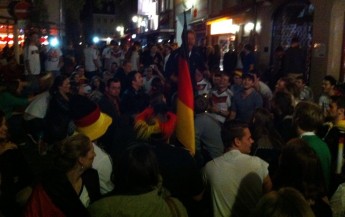 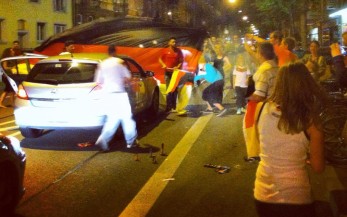 In the city center, thousands and thousands of people packed the cobblestone roads, drinking and laughing and being generally merrier than I’ve ever seen anyone from this country be. In fact, it reminded me a lot of the time Florida beat Ohio State in the 2006 national championship basketball game, when students rushed University Avenue, burned (unplanted) trees and couches, and cheered until the wee hours of the morning.

Brian and I actually stayed out much, MUCH later than we had in probably years, and it was so worth it. I can’t believe that we were able to be IN GERMANY the year they won the World Cup.

One thought on “World Cup Champions!”