Before our time abroad, a year overseas was just a wisp of a thought in my mind. To be honest, the only time I’d considered living in another country was when I did research for about 3 days in college when I thought it’d be really cool to study abroad for a semester in South Africa. I don’t even think I told my parents that I’d thought about it (surprise, you guys! :)) – I just kind of set it aside and kept moving forward.

Then, in 2009, we went backpacking through Europe. After we got back, I could tell that returning to Europe to live for some time was Brian’s next goal in life. He’d mentioned it many times, and I always thought, “Yeah, that’d be fun!” And then I’d go about my business.

In a field of wildflowers in Lauterbrunnen.

But in fall of 2012, we began to seriously discuss moving. Brian was really the driving force behind our decision, and I’m so glad he was! I don’t know that I’d have had the courage to move forward so surely. As most of you know, both of us were working full time, making a life for ourselves in Richmond, Virginia. Half of the people we talked to thought we were crazy to give up a great life with great friends when the economy (while getting better) wasn’t looking so glorious. The other half wanted to come with us.

Moving abroad was one of the most exciting, nerve-racking, and craziest things I’ve ever done. I may seem a bit scatterbrained at times, but I am generally a big-picture planner, and not knowing at all what the future held was scary. We moved without a visa, without a job, and with only a 6-week lease that didn’t even start until a week after we arrived.

Of course, everything worked out in the end, but how could we have known that beforehand? We struggled a bit to get everything together, but it was mostly the language barrier that gave us trouble. We became experts at: “Tut mir leid, mein Deutsch ist nicht sehr gut. Sprechen Sie Englisch?” And then people would look at us like we were nuts because we’d just said that in perfect German. (Spoiler: it’s still the only thing I can say and kind of sound like a native speaker.) 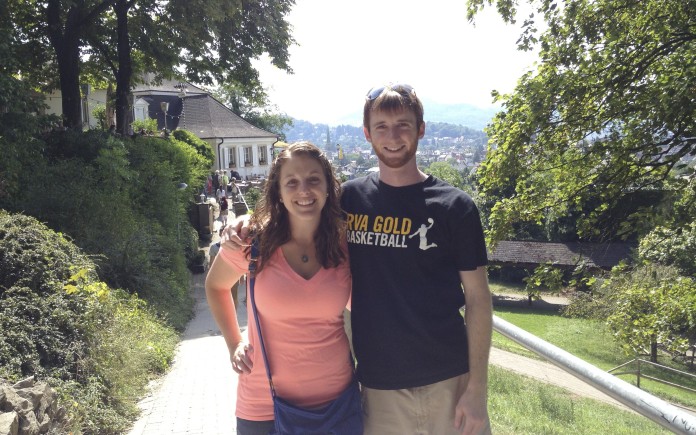 Outside our favorite Biergarten!

Anyway, we got the visa, we got a job, we found a long-term lease, and best of all, we found friends. It took some time before it finally felt like home (almost 6 months, really), but once it did, it was amazing.

Our time in Germany was liberating. We worked about 25 hours per week, including teaching English and doing some writing on the side for our friend in the U.S. In February, Brian started Freiburg Free Walking Tour, and he worked an extra 10 hours per week, on average. We were busy, but not 40-hours-per-week busy. We didn’t leave before the sun came up, or come home after it had set. We had free time during the day to enjoy our surroundings, whether that meant going for a hike, sitting on a bench to people watch, or simply eating ice cream.

It seemed like even people who had real, grown-up jobs were in the same boat! It could be a Tuesday at 2 p.m., and the city center was bustling with people. We never did find out what they did for a living.

Actually, one of the big differences we noticed between the U.S. and Germany was that nobody ever seemed to be in a rush to move onto the next stage in life, whether that’s a promotion at work, having children, or anything in between. Brian once said that Freiburg was like a place where time stopped. We met dozens of people between the ages of 18 and 35 who were all either still in school, working as au pairs, bar tending in a pub, or just trying to figure out what they wanted. And that was so cool! In the U.S., I think we often feel pressured to find a good job and settle down into adulthood, sometimes before we’re ready. I’m not referring to me and Brian, specifically, just us as a general term – millenials, perhaps.

The lifestyle in Europe is different. People stay in school until they’re 26 (or older, even!) I met folks halfway into their PhD programs who were still not sure what they wanted to do when they were done. Couples date for many, many years before they get married, and in general, they just wait until they’re older. The topic of kids was so rarely broached – in fact, I think Germany is having a population problem because millenials aren’t having kids until they’re much older, if at all.

Neither lifestyle is right or wrong. It is, of course, just a matter of preference (or maybe geography!)

Visiting the Rock of Gibraltar

On a totally different note, being in Europe also gave us the freedom to travel to so many different places, many of which I probably would have never been to without being so close! I counted that we visited 14 countries, not including Germany, during our year here.

We charmed snakes in Marrakech, watched the Changing of the Guard in London, visited the Hermitage in St. Petersburg, tried at least 15 national brands of beer, went paragliding in a village nearby to Freiburg, hiked in the Swiss Alps, walked down the Mediterranean Steps in Gibraltar, showed our families around the country, drank liter beers at Oktoberfest, went cave tubing in Belize (I’ll write a post on this as soon as my lovely, darling, procrastinating brother sends me photos), and now we’re spending a month exploring cities and villages along the Côte d’Azur.

We’ve also made so many amazing friends during our year in Freiburg. We met people from all walks of life and from so many different places in the world, that it’s hard to keep track. All I know is that I hope the friendships we forged here can last! If you’re reading, Freiburg friends, I’m expecting a good handful of you to come visit us in the States sometime in the next few years! 🙂

I’m truly speechless (although this post doesn’t seem like it) when I think about the last year and all we’ve done. I’m also really excited to get back to the U.S. where I can be with my family and friends. I’ve missed so many weddings this year (5 already), and even though I know people understand, I’ve missed out on a lot of new, amazing memories. I’ll be happy to be close to everyone again so that I can be there for these life-changing events.

I’m so grateful to have had the opportunity to spend a year abroad, growing as a person and experiencing new things. I’m also grateful to be coming back to a place full of love and family and friends where I know my future life is going to be just as amazing!

I seriously feel like the luckiest girl in the world.

4 thoughts on “A Year Abroad: Reflections”